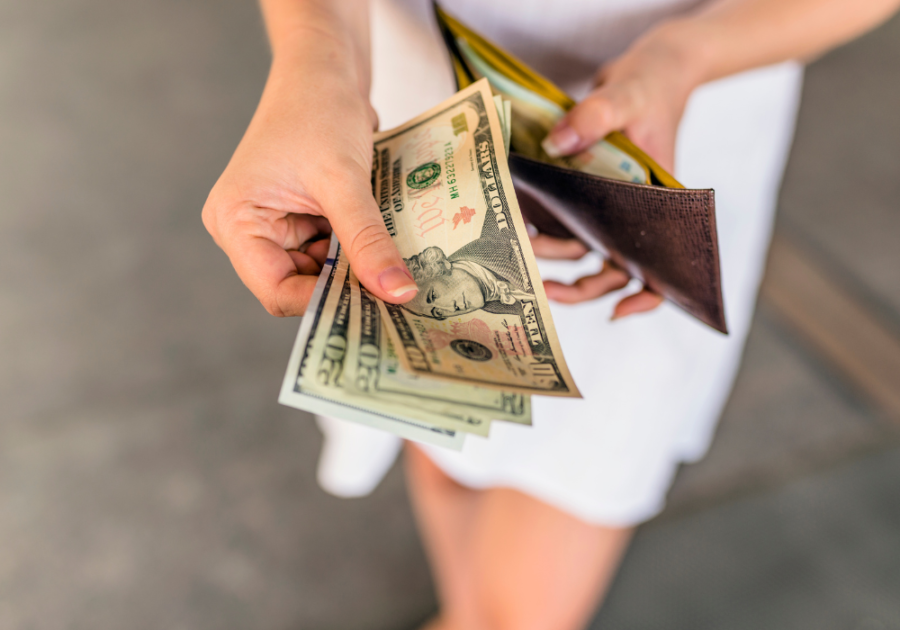 Is waiting for a man to get financially stable the right move?

Or should money problems be a dealbreaker?

So grab a beverage and settle in.

Let’s dissect how to tell if a man is “in the red.”

We’re breaking down the pros, cons, signs, and solutions for people dating men in the middle of a rough financial patch.

The answers to your questions are below.

Should a Man Be Financially Stable Before Dating?

Contrary to many social media accounts, most folks aren’t wealthy.

Unless you’re born into money — which is only true for about 1.1% of the world’s population — it’s rare for someone to be financially stable in their teens, twenties, and even into their 30s.

But pristine finances aren’t the norm for most young adults and many middle-aged people.

Also, we’re experiencing a changing and challenging economy. People aren’t expected to surpass their parents’ wealth for the first time in decades. Why is the economy changing? Several factors are at play, including:

Should people throw up their hands and give up? Of course not. Financial responsibility should be a line item on everyone’s to-do list.

But expecting every man you date to have a sterling portfolio with oodles of money in the bank is not always possible or practical.

And don’t forget that people who dedicate themselves to noble professions — like teaching, fire-fighting, social work, et cetera — don’t make much money. So think twice before judging someone by their bank account.

Does Financial Stability Matter in a Relationship?

But in reality, it’s exceptionally rare to meet someone who has never had money troubles or will have them down the road. One’s monetary status depends on many factors.

As such, financial stability’s weight in a given relationship is entirely contextual. For example:

Calculating whether he’s not financially ready for a relationship is a fluid formula. Plus, at the end of the day, money matters more to some people than others. Sometimes, it all boils down to a personality trait.

What we know for sure is that money impacts who we date and how long the relationship lasts. A survey of 2,000 Americans by OnePoll found that 42% of respondents thought financial security was the most attractive trait in a love interest.

Furthermore, according to the Institute for Divorce Financial Analysts, finances are the third leading cause of divorce in the United States.

And yes, financial stress can strain relationships, but psychiatrist Dr. Zlatin Ivanov points out in an article in “Wedding Wire” that a couple’s net assets aren’t the trouble predictor; financial IQs and routines make all the difference.

“The financial stability of a couple is based not mainly on the money they have, but on their actual spending habits,” he explains. “In a relationship, two people have to adopt a shared life vision, and a significant part rotates around money matters.”

Help! My boyfriend is struggling financially.

Before we get to the signs you’re dating a man who isn’t financially stable, let’s go over a few caveats.

Please don’t read us wrong: You don’t have to spend money to have a good time. In fact, we’re huge advocates of outdoor, low- to no-cost activities.

But if the dude you’re dating is only ever interested in doing yoga at the park, it may be a sign that he’s having financial troubles. On the other hand, he may just really be into yoga. And if you are too, it may be the perfect match!

If he invites you out for a drink and calls the complimentary peanuts a “meal,” there’s a higher than average chance he’s currently a little “light in the wallet.”

We appreciate the Olive Garden’s breadsticks and salads as much as the next person, but if your man can’t level up on special days, it may be a sign that he’s watching his bottom line.

If you both love Olive Garden, have at it. Hey, Warren Buffet, one of the wealthiest humans on the planet, isn’t big on spending lots of money on food and doesn’t drive flashy cars.

But if he knows you’d love a fancy night out, and he never comes through, it may be because he can’t afford it at the moment.

3. He Always Asks You To Pay

Is your man always asking you to pay for everything? It’s a red alert.

This type of behavior goes beyond “maybe.” If he always has his hand out, he probably doesn’t have much, and he may not be working hard to rectify the situation.

(If you want to watch a few cautionary tales, check out “Bad Vegan” and “Dirty John” on Netflix. After some binge viewing, you’ll have a newfound appreciation for maintaining financial freedom and independence.)

4. He Never Invites You to His Place

You’ve been dating for four to six weeks, and you still have no idea where he lives. Sure, he could be living the Bruce Wayne life. But it’s much more likely that his place is a sore spot for him.

If he’s upfront about his living situation, and there’s a valid reason why hanging out at his place would be uncomfortable, then fine.

If he avoids the topic like the plague, you may want to dig deeper and uncover the mystery. After all, you want to ensure he’s not on some prison work-release program!

5. He Gets Nervous When Money Is Mentioned

Does he become agitated, flustered, or annoyed anytime the subject of money comes up?

Granted, talking about money is considered déclassé in some circles. And as such, chatter about dollars and cents makes some people very uncomfortable.

But your instincts can tell the difference between someone refraining from counting other peoples’ money to those who descend into a stress spiral anytime anyone utters the word debt or dollar.

6. His Lifestyle Doesn’t Match His Job

Your man is a manager at Mcdonald’s, but he lives in a penthouse and drives a Lotus. Unless he’s the second coming of Prince Akeem Joffer of Zamunda, something in this picture doesn’t add up.

People with big money problems sometimes try to cover it up with flash, bling, and outsized living.

Unless your man won the lottery or had a secretly rich aunt who left him everything, be curious about guys who talk a big game but don’t have the credentials to back up their vibrato.

7. He Lets Bills Pile Up

Bill stress is real; people tend to let invoices pile up when it hits. When you’re in a financial spiral, sorting through the mess is the last thing you want to do. After all, who wants to be reminded of how much money they owe?

If you notice mail piled up around his pad, it may mean he’s dealing with some money matters.

21 Examples Of Healthy Boundaries In Relationships

What To Look For In A Man: 31 Qualities Of A Good Man

8. He’s Not Eager To Commit

Is everything going well between you and the guy you’re dating, yet he doesn’t want to commit? His reasons for holding back could be attributed to several things, including a lack of funds.

Some men prefer not to begin serious relationships if their “bag” isn’t in order. This preference may be particularly true for men in their 30s and older who may be dealing with divorce debts and other mid-life financial issues.

Does your guy talk a big game but never follow through? If so, you may be looking at a financial coverup.

Please don’t read us wrong: Dreaming big is perfectly acceptable. We encourage the behavior, frankly. But hot air and actively dreaming, planning, and striving for your goals are two different things.

10. He Flakes Out on Big Plans

Sometimes, life happens. But if it keeps happening, it may be a sign that your man has financial woes that he doesn’t want to discuss.

Does the guy you’re dating bail at the last minute frequently?

If this characterizes your situation, several options are available.

You can wipe your hands and walk away, subtly steer future plans away from expensive events, or ask him directly. What you choose to do will depend on the status of your relationship.

Has the guy you’re dating been telling little lies? Are they starting to pile up? His deception may be rooted in issues he’s trying to conceal, including money problems.

If the lies are silly and just to save face, they may be forgivable. But if he starts telling whoppers, consider if the drama is worth the hassle. After all, a relationship without trust can’t go far.

We’ve discussed signs that your man may be struggling financially. Now, let’s look at your options and potential solutions.

Before you start mapping out five-year solutions, take a deep breath, and then consider whether you should even be inquiring into his financial business.

How long have you been dating? If you’ve been together less than two months, it’s probably not your business. Even at eight weeks, you may be pushing your luck.

If you’ve been together for a while, gently broaching the subject may not be a bad idea. If you live together or share bills, you have a right to know what’s happening.

2. Ask Him If He Wants Your Help

You’ve thought about it and think you may be able to help. Before jumping in to save the financial day, ask first. It can be a tricky conversation, so be as sensitive as possible.

If you determine it’s your place to worry about your man’s finances, and he agrees, step one is understanding the situation. Try not to jump to conclusions or be a snoop. If you’re going to work on finances together, trust is a must.

Make a Plan Together

The next step is outlining a plan.

Use common sense. Figure out how much he brings in a month and go from there. Identify where his budget needs trimming and try to set up payment arrangements.

4. Stick to the Budget

If you dive into a financial rehabilitation plan together, follow it! Both of you must stick to the budget for it to work. Constantly “treating” yourself will get you nowhere fast.

5. Be Respectful and Kind

Money matters can be nerve-wracking, and situations grow even more fraught when one person is passive-aggressively poking at the other over financial issues.

Nobody wants to go through money troubles, but it happens to the best of us. If you care about the relationship and the guy, don’t add to the stress by belittling him and being unkind.

It’s common to experience patches of financial austerity and strain. Going through it builds character and, if you’re lucky, compassion for yourself and others.

Your guy can overcome financial woes. Yes, it’s daunting — but possible. It just takes a bit of planning, discipline, and hard work.

If everything else is going well with the relationship, try to have faith in his ability to turn things around for the better.