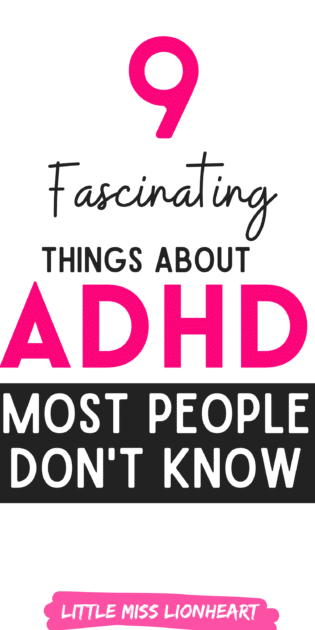 If you have ADHD, you’re probably intimately aware of the symptoms. You live them on a daily basis, right? We can’t get through the day without struggling with forgetfulness, impulsivity, fidgeting, zoning out (and back in. And back out), etc…

But even if you’ve had ADHD (and known about it forever), there are probably some things that you didn’t know were related to ADHD. And I’m not talking about the fast facts that most of us have heard: yes there are 3 types of ADHD, and we tend to be messy, and there’s that whole cliché about ADHD and squirrels…

Here are 9 things you may not know about ADHD.

People with ADHD tend to be more Justice Oriented

As kids, we were the ones more likely to insist on things being fair. And, in my case, to keep insisting on and on and… It turns out, that’s an ADHD thing! Our sense of fairness is often stronger than others which can be both a blessing and a curse. It can propel us to seek justice for those who have been wronged and victimized. Our sense of fairness is often oriented as much toward seeking it for others as it is seeking it for ourselves. It can also lead to a strong desire for vengeance when we’ve been wronged (either pursuing it or thinking about it a lot). Letting go of injustice that we cannot right is often extremely difficult for us.

We tend to be Creative Thinkers and Innovators

You may have heard that people with ADHD tend to be more creative. I’ve heard a lot of people struggle with that because they don’t see themselves as creative. While it’s true that we may be more creative with crafts and other “creativity based hobbies,” what this really means is that the way we think tends to be more creative. When your brain bounces all over the place, it turns out that it can help us make connections that other people don’t make. That might look like inventing new things, or it might mean that we provide a different angle to consider an issue that others are overlooking.

Some of the benefits of being your own boss work really well for those of us with ADHD. It often allows us more flexibility to work on the things that we are super excited and interested in, and (at some point) delegate the tasks that we really hate doing. It allows us the freedom to use our creative thinking and pursue different angles that a boss often stifles. Maybe that’s why many of us become self-employed.

Of course, ADHD also offers some challenges like struggling to do things you need to do but really don’t want to do, meeting deadlines, being organized enough to function, etc… which can be especially hard before we’re able to delegate or find accommodations for the challenges.

Those with ADHD, Often Have Other Health Challenges, too

Obviously a single individual with ADHD will probably not develop all of these, thank goodness. But unfortunately, many of us are cursed with a few of them. I personally have problems with digestion, sleep, and migraines. It’s a definite downside of ADHD.

Related: Is it ADHD, Anxiety, or Both?

People with ADHD tend to be Good in Crisis

This is often true, but not universally true. For many people, it may depend on the type of crisis as to whether or not they are better suited to handle it. But overall, we tend to be calm and keep our wits when emergent situations occur. That can look many ways: the person who works best under pressure, the one that takes charge in life or death situations, or the one able to navigate a situation that others are overwhelmed by. That’s why a lot of people with ADHD end up in crisis oriented careers like E.R. doctor, EMT, police officer, firefighter, stockbroker, and others.

We have an Interest Based Nervous System

Those of us with ADHD have a nervous system that prioritizes interest above just about anything else. That’s why, even though taxes may be due next week, you’ll find us obsessing over a new idea that we had.

The nervous system of a neurotypical person usually  makes taxes feel very important if they are due next week. Unfortunately, the interest based nervous system that we have doesn’t make taxes feel important until the last possible minute. That’s why we are known for procrastinating and relying on rapidly approaching deadlines to get things done.

To add insult to injury, a neurotypical person feels a greater sense of reward after finishing something, even if they didn’t like doing it. That helps reinforce the behavior. But those of us with ADHD don’t get nearly the reward or pleasure of having something finished. So taxes are hard for us to do and we don’t even get to feel particularly rewarded once it’s finally over. Yay us.

We’re More Likely to Get into a Car Accident

Another bright spot of having ADHD, right? It turns out we are more likely to get injured at in a car accident or even at work. Unfortunately, we tend to have more accidents in general than the average person. It makes sense if you think about it. Struggling with attention is particularly problematic if you are driving. If you work with machinery or other potentially dangerous things, struggling to concentrate can be a major problem. The good news is that this association between injury, accidents, and ADHD is diminished when we are medicated or otherwise properly treating our ADHD.

Related: 7 Ways ADHD actually gets WORSE as an Adult

ADHD can look different as you age

We all know that some people can age out of ADHD. In fact, back in the 90’s doctors believed that it was purely a childhood condition. I guess they thought that turning 18 suddenly made your brain work differently. Who knew?

While some haven’t caught up to the current research, most of us know that ADHD doesn’t go away for a large percentage of us. But interestingly, it can look different at different times in our lives. For some, their symptoms really popped out in elementary school. For others, they were able to navigate it until life got harder: college, becoming a working adult, becoming a mother, owning a business, etc… Our symptoms often get worse when we have more and more responsibility piled on.

And hormones impact our ADHD. For some, pregnancy heightens their symptoms while it reduces them for others. And menopause! For some, their symptoms ease and for others they get much worse. On a shorter term scale, many women notice changes in how ADHD affects them based on the time of the month.

It baffles me that emotion regulation isn’t mentioned anywhere in the criteria for ADHD. Especially when research indicates that stronger emotions are present in nearly everyone with the disorder. Somebody should really do something about that…

The ADHD brain struggles with regulation in general, including emotions. It often focuses intensely on a single emotion and magnifies it, leaving us to be completely overwhelmed by anger, or anxiety, or sadness, etc…

Then of course, there is Rejection Sensitive Dysphoria. Those of us with ADHD tend to be much more sensitive to criticism or rejection than other people. That sensitivity leads to an overwhelming shame response that can absolutely blow you away with it’s intensity. Unfortunately, we are also more likely to be criticised, too, which just really sucks. Again…yay us.

Related: Everything You Need to Know about ADHD and Rejection Sensitive Dysphoria

ADHD is an interesting beast both to think about and to live out and there’s a lot more to it than most people realize. These 9 things aren’t often taught or learned, even when you’ve struggled with ADHD your whole life.