Are You Dating A Player? 17 Not-So-Subtle Signs Of A Player In A Relationship 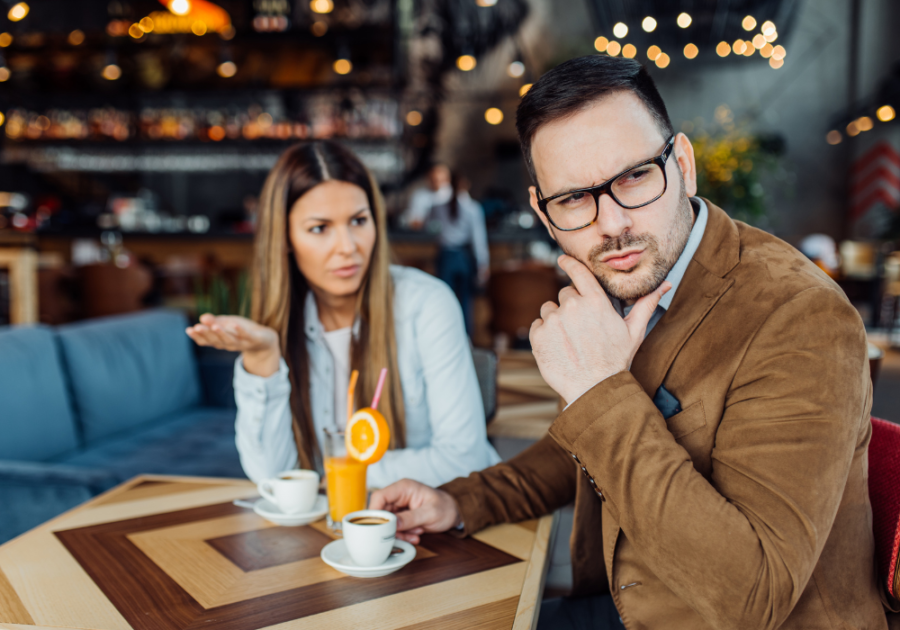 The dating world can feel like a treacherous place when you’re looking for a real connection.

Guys that are players may come off as charming and attentive initially, but their true intentions eventually come to light.

Unfortunately, it’s not always easy to tell if you’re dealing with a player right away—but there are some warning signs of a player that could clue you in.

By identifying and recognizing these signs, you can save yourself a lot of time and heartache in the long run.

What Is a Player in a Relationship?

Relationship players are people who are more interested in pursuing short-term, physical connections than they are in cultivating meaningful relationships.

They typically engage with multiple partners at once and lack the commitment to any one person.

Playing the field is their way of life—it’s all about the chase, not the destination.

Here are some ways your relationship will feel like if you’re dealing with a player:

• You’ll feel like you don’t really know them. They’ll often keep you at arm’s length, never truly opening up and letting you in.

• Intuition will tell you that something is off, and trust will be hard to establish in the relationship.

• You may feel unfulfilled in the relationship and as if you’re always waiting for something more.

It doesn’t feel great to be around someone like this, but being aware of these signs can help you make better decisions in the future and honor your relationship needs.

17 Warning Signs of a Player In a Relationship

Wondering how to know if he’s a player? We’ve got you covered. See if any of these signs ring true for your relationship.

1. He Overpromises and Underdelivers

A player will always tell you what you want to hear, but in the end, he doesn’t follow through. You can especially detect this behavior early on in the relationship if you think he’s offering much more than usual for a new partner.

He may be charismatic and make grand gestures, but it’s essential to look for consistent behavior that follows his promises. Otherwise, this could indicate a player who will only disappoint in the long run.

2. He Pressures You to Be Physical Too Quickly

Is your partner pressuring you for physical intimacy too soon? Rushing toward intimacy indicates that he’s more focused on short-term rewards and not interested in investing in the relationship.

It can be quite uncomfortable and even intimidating if he’s constantly trying to make advances and push boundaries. It shows that he isn’t patient and isn’t considering your feelings.

When someone is a player, they can’t help but flirt with anyone else around them. If your partner is constantly hitting on servers, friends, and even strangers, it’s a sign that he may not be ready to commit to one person.

It is especially true if you’ve talked with him and asked him to stop, but he does it anyway. This player relationship will leave you insecure and unfulfilled if your partner demeans you this way.

4. He’s Always On His Phone

Another sign of a player is constantly being glued to his phone, even when you’re together. Excessive phone use could mean he’s actively talking to others or looking for someone else to hit on.

If you see him shielding the screen or stepping away to use the phone, this could signify that he’s not being open and honest with you.

It can be uncomfortable to feel like your partner isn’t present with you and is more focused on someone else than the conversation.

He’s clearly not sensitive to your needs in the present moment, whether or not he is talking to someone else.

5. You Notice He Has Wandering Eyes

Your partner doesn’t need to use his words to express his feelings—sometimes, it’s enough to look at his body language.

Suppose you notice that your partner has a wandering eye, constantly looking around for someone else to connect with or simply admiring the physique of others around.

This behavior shows he may not be ready to commit to one person.

6. He Hasn’t Introduced You to Family or Friends

Another sign of a player is if he has yet to introduce you to his family or friends. If it’s been months and he still hasn’t taken the initiative to introduce you, then that’s a good indicator that he isn’t ready for anything serious.

Players usually prefer to keep their worlds separate and avoid mixing up business with pleasure, which is why he may not be ready to introduce you personally.

There’s nothing worse than having plans canceled for no good reason. If your partner continuously cancels plans or bails on you at the last minute, he’s trying to keep his options open or even has another date.

You feel confused and wounded, especially if you’re trying to make things work in the relationship.

8. You Catch Him in Little Lies

One of the most significant warning signs of a player is catching him in little fibs or outright lies. Even though they may seem trivial and insignificant, they could indicate that your partner isn’t trustworthy or reliable.

Constantly catching him in lies, big or small, is a clear sign that there’s something off about him and the relationship. There may be a reason your partner isn’t upfront with you, but it’s likely not a good one.

While this isn’t necessarily a sign of your partner seeing other people when your conversations are one-sided, it suggests he’s not invested in knowing you more deeply.

If your partner is always talking about himself or his interests and never engages in meaningful conversations with you, he likely needs more time to be ready to commit.

You may notice that he talks over you, doesn’t respond to anything you say, or simply doesn’t care to ask questions about your day.

If you ask your partner questions about the future or your relationship, and he avoids those conversations altogether, then it’s a sign that he’s not ready to commit.

A player might be willing to talk about any other topic, but when it comes to big topics like marriage or kids, he’ll stay quiet or change the subject.

If you have asked your partner about his intentions and he doesn’t seem to want to get into an honest conversation, he’s just in it for the short term.

Nostalgia is one thing, but if your partner is constantly boasting about his partying days or how much of a ladies’ man he was, he isn’t mature enough to settle down.

A player may think that talking about his past exploits will make him more attractive in your eyes. However, it’s usually just a sign that he’s not ready to commit.

Is Your Guy Pulling Away? 11 Smart Ways to Turn the Tables on Him

21 Bare Minimum Expectations You Should Have In a Partnered Relationship

What To Look For In A Man: 31 Qualities Of A Good Man

12. He Keeps Tabs on Other Women

If your partner is constantly checking out other women, whether in person or online, run for the hills. This guy is so far from a committed relationship that it may not be worth your time, especially if you want to find “the one.”

Of course, it’s fine if your man has other female friends, but if he’s constantly looking for someone new or making comments about other women, he’s still playing the field.

13. You Only Hear from Him Late at Night

When it comes to relationships, communication is key. If your partner only contacts you late at night or when he’s feeling bored, then he isn’t interested in anything real with you. It’s a booty call.

When he’s reaching out late at night, he has already attended to his other priorities or his other date canceled. But you want to be a priority, not a backup plan.

So if you’re not getting the attention or communication you deserve, it may be time to re-evaluate the relationship.

14. He’s Not Ready for a Relationship Status Change

One of the biggest signs of a player is when he doesn’t change his relationship status on social media. If your partner is still single on all his platforms, then he’s either ridiculously out of touch or not ready to commit.

If you met him on a dating site and he’s still active on it, even though he says he isn’t dating around, then things are squirrely. Have you seen him regularly logging in? Has he left his status as “single” for months after dating you?

If so, it’s time to think twice about his intentions in the relationship.

15. He’s Defensive When it Comes to the “Player” Label

If you try to bring up the topic of players or commitment and your partner immediately gets defensive, he’s hiding something from you.

A player will get angry when confronted about his reputation because he doesn’t want to face the truth about his behavior.

If he’s not willing to have an honest conversation about your relationship, it’s likely that he’s not ready to enter a more profound commitment.

Instead, he’s trying to guilt-trip you and play the victim so you won’t dig deeper into his actions and motives.

16. You Hear Things About Him Through the Grapevine

If you have friends or family talking about your partner’s reputation, it could signify that he’s still playing the field. Players tend to leave behind a trail of broken hearts and people who know about it.

So if you hear things through the grapevine, then it’s possible your man is a master player.

If people repeat the same stories about your partner, pay attention and don’t ignore them.

If he avoids directly talking to you about the comments and accusations, it’s even more likely that they’re accurate and, even worse, that he’s unwilling to own up to them.

17. He Only Acts Interested in You When You’re Between the Sheets

Of course, it feels nice when someone is physically attracted to you and wants to show it.

However, if this is the only time your partner seems interested in you or shows any emotion toward you, it could be a sign that he’s just in it for physical pleasure.

If you notice him turning distant or uninterested outside of the bedroom, then it may be time to reconsider your relationship. A real connection is built through trust and communication, not just sex.

Examples of Things a Player Will Say to You

There are plenty of soundbites when it comes to players. Here are some of the most common phrases you may hear from a player:

These phrases may seem harmless, but they’re designed to keep you in a state of limbo. A real relationship isn’t based on fun and games; it’s built on trust and security.

So if you hear any of these phrases, take it as a sign that your partner may avoid committing.

Most people want to find someone who will commit to them in a relationship. But if you notice any of the signs above, then your partner is a player.

It’s best to protect yourself from getting hurt by being aware of the warning signs and not ignoring your gut instinct. Communication is key, so make sure you have honest conversations with your partner about your expectations and feelings.

By talking openly with your partner, you’ll avoid making unhealthy assumptions or going to anger out of fear and uncertainty.

While it can be difficult to accept that your partner may not share your feelings, it’s better to know the truth than to waste your time hoping for a commitment that won’t come.

Ultimately, being aware of the signs of a player will help you guard your heart and find the companionship that you deserve. With patience, understanding, and an open heart, you can find the relationship of your dreams.