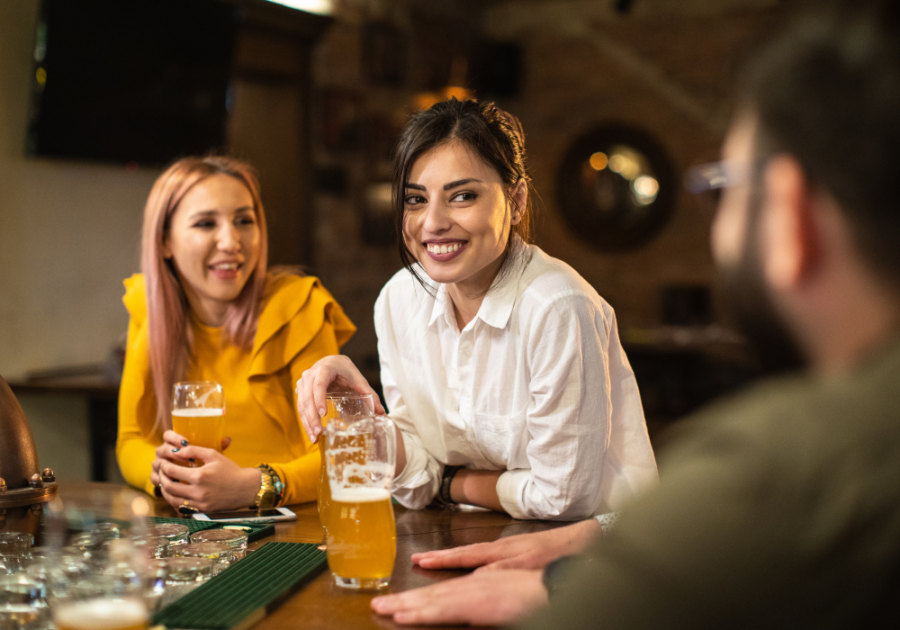 A gut instinct in relationships is too often assumed to be bad, like suspecting a partner is cheating.

It can also warn you when something just feels off.

But trusting your gut feeling about someone can span both positive and negative qualities, including helping to confirm that someone is a good fit.

It could be when something just “feels different” after a series of failed relationships or when you meet someone new and have that “this is the one” feeling.

Can you reliably trust your gut feelings in matters of love?

Let’s dig deeper to find out and look at some reasons to trust your instincts.

Should I Trust My Gut When It Comes to Relationships?

You can trust your instincts in relationships if you can easily separate them from other intense feelings, like the hormone rush of a new relationship or searching for confirmation bias to validate your feelings.

In a relationship, your gut feeling should be a factor, but not the only factor.

DO know the difference between your gut, emotions, and strength.

DON’T only trust your gut.

What Is a Strong Gut Feeling About Someone?

Gut feelings and intuition manifest in different ways. Lingering longer in a conversation than you normally would or feeling a magnetic attraction to a stranger are examples.

It’s also essential to figure out when your intuition is talking to you or some other aspect is taking over. We can address this by listing what a gut feeling is not.

27 Gut-Feeling Signs You’re Meant to Be with Someone

Whether you have a gut feeling someone is attracted to you or you feel like you’ve finally met the one, there are telltale moments to seize.

Overall, look for the things that happen quickly and unexpectedly.

Following gut instincts to safety and happy spaces brings a sense of calm to the nervous system and brain.

A sense of calm and peace is hard to find in a world filled with relationship drama. A calm soul with a focused vision of the future directly results from gut instincts guiding you.

While science can explain a lot about gut instincts, there’s little data that can debunk the connections that two people have when they are in sync.

Maybe you’re thinking about the person moments before they text you, or you can finish each other’s sentences without effort. Feeling like two connected puzzle pieces is a good gut instinct.

3. You’re Not Able to Trust Yourself

Fear and anxiety creep in when we have a history of making poor relationship choices. Maybe you tolerate too much suspicious behavior to avoid rocking the boat.

It’s hard when we face failed relationships to know if we’re even able to sustain a long-term relationship. Gut instincts can help propel or parachute out of a relationship.

The logic of the brain and emotions of the heart can be sloppy and multi-directional. They often can arm wrestle to force a convincing argument.

Your gut instinct is the True North of that battle. If your pros and cons columns are even, all things considered, gut instinct could be the final determining factor.

There’s a great example from the 2002 movie The Sweetest Thing when Cameron Diaz tells Christina Applegate about the guy she met named Peter. Christina’s character says, “OMG. You named the puppy.”

The habit of these single ladies was avoiding first names unless it was serious. Yet, without realizing it, Cameron’s character had a gut instinct to call him by his name moments after meeting.

If you’re breaking character, you could lean on a gut instinct without realizing it.

Have you ever known someone who said, “I just don’t have time for a relationship,” and then months later has a fantastic partner who adores them?

A gut instinct can make you feel ready to be committed to a certain person, even if you weren’t looking for it. It can also make women who adamantly say they don’t want kids to start planning children’s names with their new partner.

7. You’re Navigating Better in this Relationship

Those first three months of dating can be brutal as boundaries are defined, and we’re shedding that “ideal” image of fresh connections.

Gut instinct, consciously or subconsciously, can assign value to a relationship our brain doesn’t realize. It can also slow down an aggressive heart looking for commitment ahead of its time. Gut instincts can save us from ourselves.

8. You’re Unable to Shake It

As much as gut instincts appear suddenly, they can linger inside.

While gut instinct helped cavemen and cavewomen survive wild jungles, it can also keep you on the right path with a nagging sensation that this is good for you. While we can ignore gun instincts, we cannot silence them.

9. You’re Dreaming About It

For those who have a habit of ignoring gut instincts, they can talk to you while you’re sleeping to get your attention.

Your subconscious is on a constant Zoom call with your intuition, and they can partner up to produce dreams, sometimes very vivid, about what you should do. This can also help discern between spur-of-the-moment decisions, and sudden gut instinct urges.

Ok, so many of us don’t admit this one. However, a gut instinct can present itself as a voice saying, “Go talk to him,” or “Don’t wait three days to call him back.” It’s like that voice in Field of Dreams encouraging Ray to “Go the distance.”

Indecisive or independent people constantly wrestle with decisions, especially when it involves a relationship that takes time, effort, and vulnerability.

You could have a history of finding a dealbreaker by date three to protect your heart. Or perhaps you never message back on that dating app. But something about this time beckons you to explore beyond your normal boundaries and hesitations.

Competing in a social media-fueled world of filters and fantasies is hard. Self-confidence can be chipped away when we don’t feel like we’re good enough, smart enough, or attractive enough for our partner.

Without even trying, a good gut instinct tells you that you’ve met an equal match.

Does He Only Want You For Your Body? 19 Signs He Does

21 Signs The Universe Is Trying To Tell You Something

Are You Growing Complacent in Your Relationship? 11 Signs You Are and How to Fix It

13. You’re More Able to be Present

Gun instincts keep us honest and don’t allow anxiety or fear to overwhelm the relationship status.

Instead of worrying about when he’ll commit or if he’s ever going to pop the question, you’re enjoying and savoring every moment with the other person because you know you’re on a good path.

Even when our guts lead us in a certain direction, there’s nothing wrong with getting a second gut opinion. When we feel open to letting a new partner meet our friends, we can also ask about their gut instincts.

Since close connections with friends and family are generally built on good gut instincts, we know we’re getting solid feedback with fewer emotions mixed in.

15. You’re Having Trouble Explaining It

We want answers to everything for peace and clarity. Gut instincts won’t come with a Wikipedia page. We can search for rhyme and reason but seldom find either.

Examples include statements like “I’ve just never felt anything like this” or “I feel drawn to them.”

Your mind didn’t lead you to this article. Your gut did. When we’re less concerned with the gut instinct reason and more about the process of how gut instincts work, we’re honed into the magical feeling of our sixth sense.

We’re also learning the importance of separating logic and emotions from guttural urges.

We have to make snap decisions daily, but we rarely make the same decisions. We explore menu items at the local pub or date several people at once.

Gut feelings are about the strongest convictions that you’ll find in this world. They remain constant, and if they aren’t factored into a decision, we could spend a lifetime worried about “the one who got away.”

The enteric nervous system that fuels gut instincts is also connected to our pulse, heart rhythm, and muscles. While gut instincts can cause deep feelings, they can physically impact our bodies in the following ways.

Since gut instincts can barricade fears, we’re suddenly so much more aware of… everything. The birds in the trees and the small of his cologne. The clarity that comes with the sixth sense fires up the other senses that might have been dormant on any other date.

We’re suddenly sponges, soaking in every sensation or holding hands and not realizing where our hands end and theirs begins.

Overthinking Anonymous should really be a support group for as much as it happens. Even when gut instincts conflict with thoughts or emotions, we’re far better able to categorize them than if a situation didn’t include gut guidance.

It’s similar to when you’re in a strange city but using GPS to guide you instead of struggling to follow written directions.

Even with that GPS, you still wouldn’t drive through downtown Chicago without checking other factors, like weather conditions, time of day, and dangerous neighborhood lists.

When our internal GPS is equally balanced with logic, rationale, and hormone surges, we’re well on our way to a healthy relationship.

Powerful gut instincts can cause us to search out more signs we’ve ignored. Not every gut instinct in a relationship will be monumental.

If we feel inclined to follow our gut more often as a test of its validity, we can better differentiate a true gut instinct.

Our inner voice can wreak havoc on gut instincts if we let it. A cognitive bias is when we only accept information that supports what we think we want and dismiss information that conflicts with it.

This is when we justify texting them yet again because “their phone must’ve died.”

That unease in your belly, in that instance, isn’t usually gut instinct; it’s a justification fear disguises as gut instinct.

24. You’re Not Trying to Talk Yourself Out of It

No, it’s not the Chipotle burrito causing belly rumbles. It’s certainly not “that time of the month.” Those who practice gut instinct guidance will not argue with the unexplainable. They might use caution but not host an internal filibuster.

25. You’re Not Letting Pride Get in the Way

Even great relationships have struggles. As much as gut instincts strive to keep us on a peaceful path, one big fight can cause a landslide of emotional wreckage.

Gut instincts stop us from saying, “They better apologize first,” and allow us to realize what we’re missing out on.

The positive reinforcement of trusting your gut in relationships will build confidence to follow it in other areas of your life. A well-balanced decision with a finely tuned gut instinct can lead us to get everything we ever wanted.

We’re also making the world a better place as we share this healthy process with those around us.

Gut instinct can be a guardrail in a relationship, but we still can’t walk the path with blinders on. Healthy relationships are going to have pressure points while two people blend lives.

If a gut instinct suggests your guy is not where he says he is, that opens the door to conversations about transparency and boundaries.

How to Listen to Your Intuition in Relationships

Remember, you’re looking for the unexpected, and in a busy life, that can be unwelcome. Self-awareness is key to listening to and following your intuition accurately.

A gut instinct is just one of the many ways our body helps us focus on the proper path. Hone it and practice it when the stakes aren’t so high to be better poised to use it as an asset during bigger decisions.