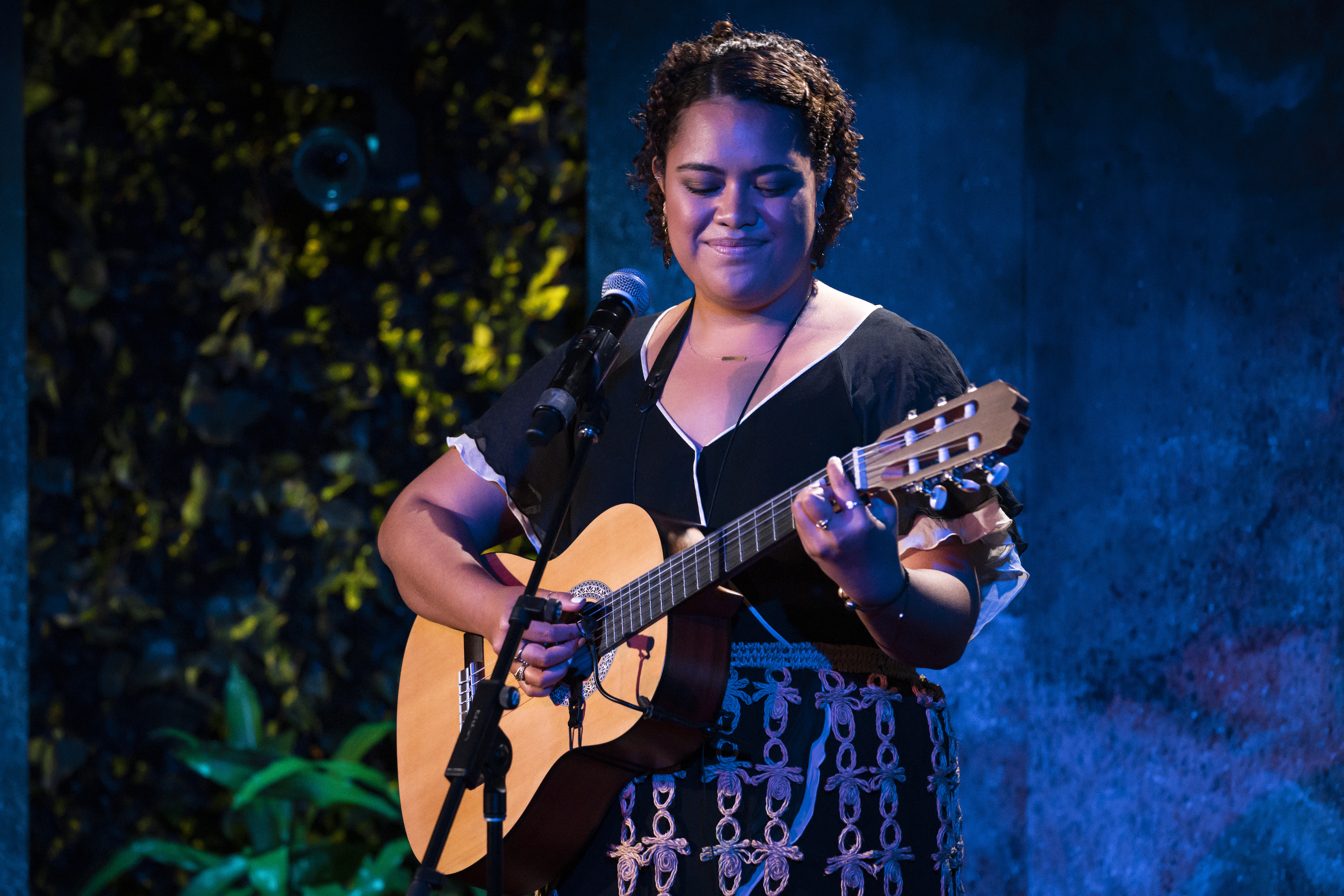 The first-ever TED Salon co-created in partnership with Nia Tero featured five extraordinary Indigenous leaders, collectively representing thousands of communities worldwide. Speaking on issues connected to Indigenous environmental guardianship, the speakers laid out a compelling vision for how to better steward the Earth.

When and where: Thursday, September 22, 2022, at TED World Theater in New York City

Opening remarks: From Katsitsionni Fox, who opened the space by giving thanks to everything from the strawberries and bugs to the winds and the Moon; and from Nia Tero’s CEO Peter Seligmann, who spoke on the importance of centering Indigenous voices in climate action and finding new ways to love Earth.

Music: From singer-songwriter Mia Kami, who performed two songs — “Mana” and “Salt Water” — and filled the room with the sounds of the Pacific.

The talks in brief: 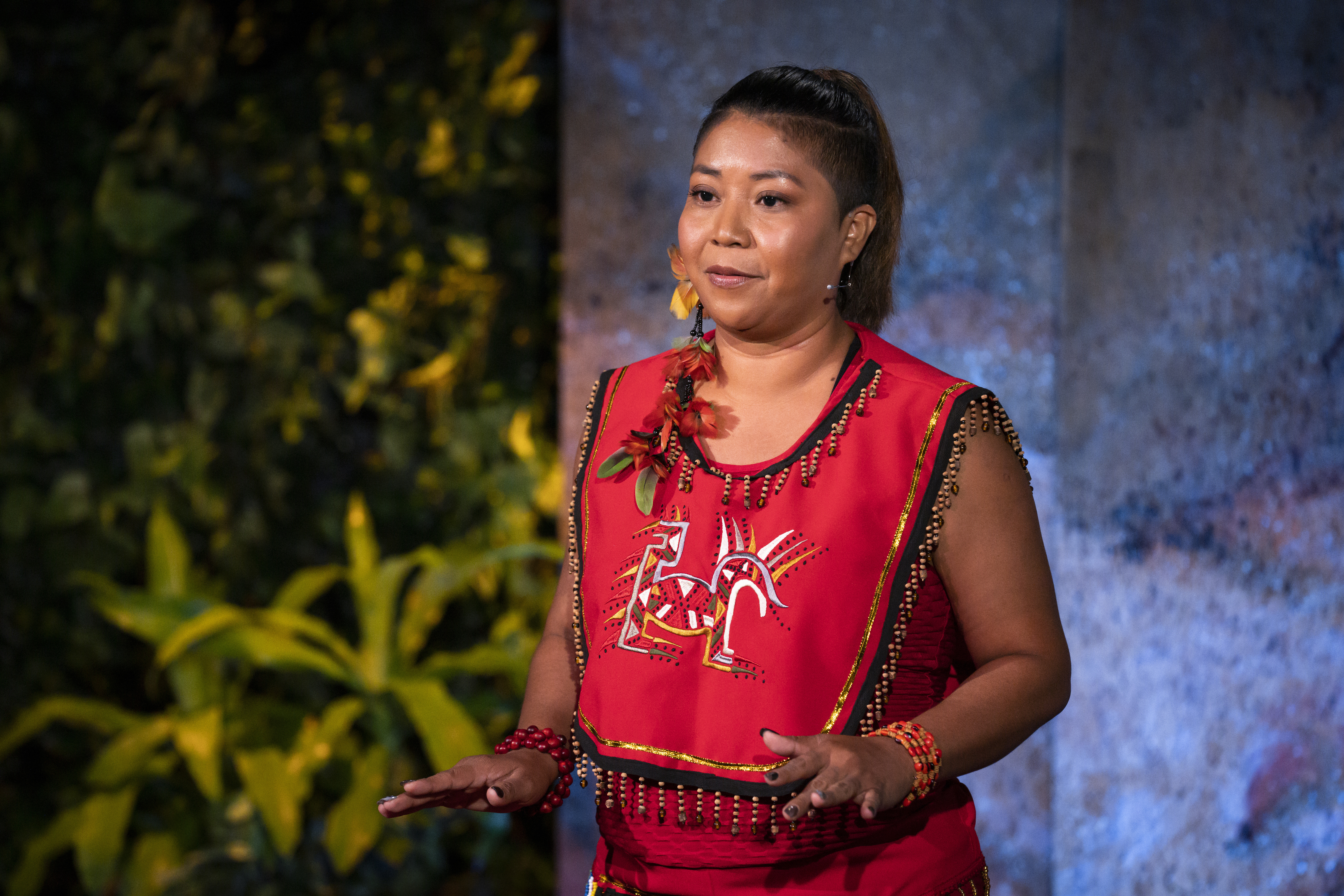 Jupta Itoewaki’s native Suriname, with 93 percent of its surface area covered by pristine forests, is one of the world’s greenest countries — in no small part due to the efforts of its Indigenous people, who are dedicated protectors of the natural world. These stewards of the world’s biodiversity should lead the world’s efforts to preserve the habitats in which unique biomes thrive, says Itoewaki. She shares five “Rs” to help understand Indigenous guardianship. First, responsibility — we are all responsible for decolonizing Indigenous lands, and for listening to Indigenous voices. Second, respect Indigenous voices, knowledge and autonomy. Third, cultivate relationships with Indigenous communities rather than exerting power. Fourth, reciprocity — share power and resources. Finally, redistribute ancestral lands to their rightful stewards and owners. 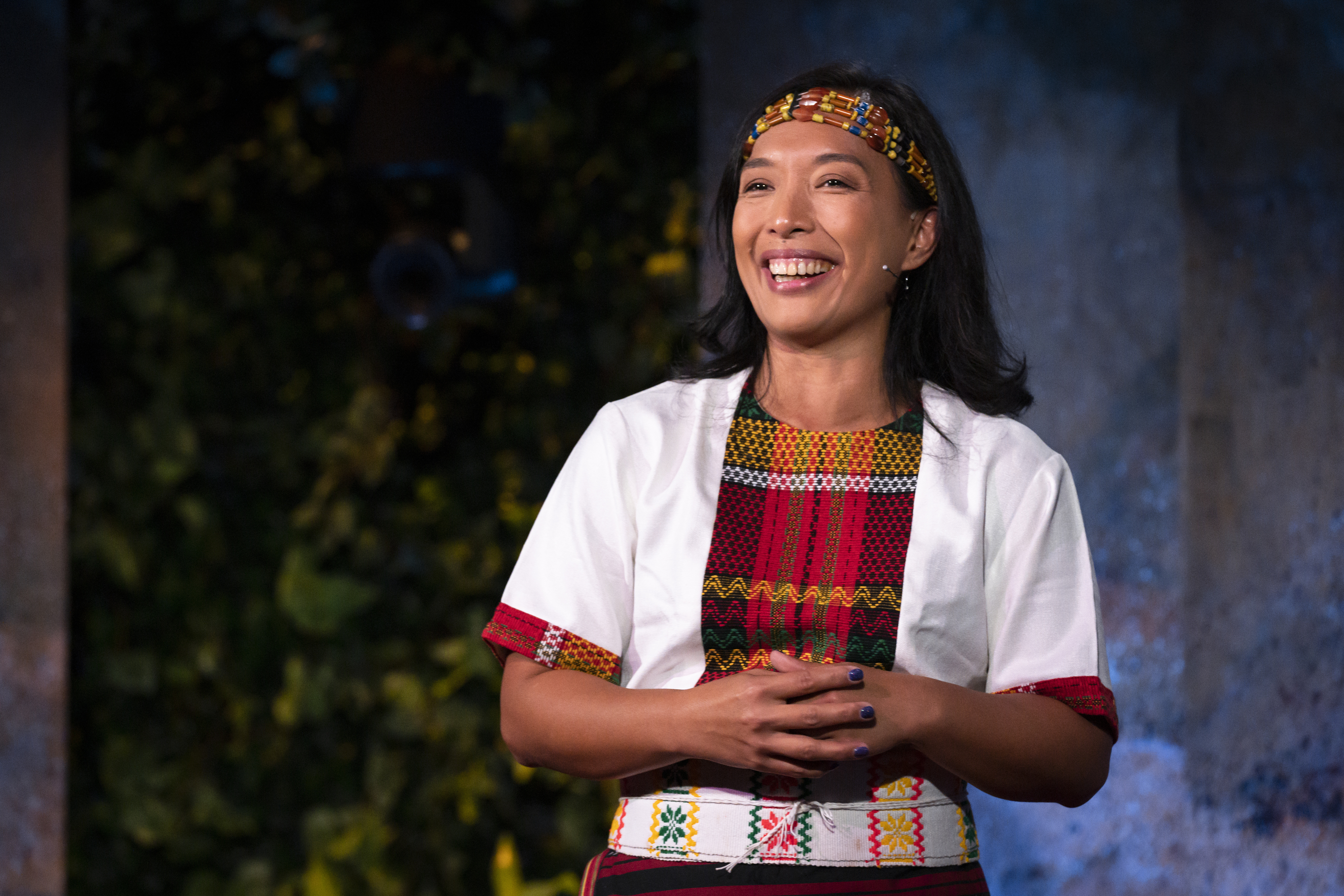 Big idea: Although colonialism has softened its face over the years from violent oppression to development, the outcomes have remained the same: Indigenous people are exploited for the developer’s gain, without the consent of their communities. Jennifer “Jing” Corpuz shares the long struggle of her people (the Kankana-ey Igorot People of Mountain Province in the Philippines) against the changing tactics of their would-be exploiters — and shows why this struggle is important for the whole planet.

How? Exploitation has followed the same sad script for most of history — moving into a place and stripping it of resources, so that the wealthy few can grow wealthier, while the people whose lands they have appropriated fall into servitude. Some of them, like Jennifer Corpuz, fight to advance the Indigenous values of the common good, community health and stewardship of lands — and, in the process, hope these values prevail and save our planet. 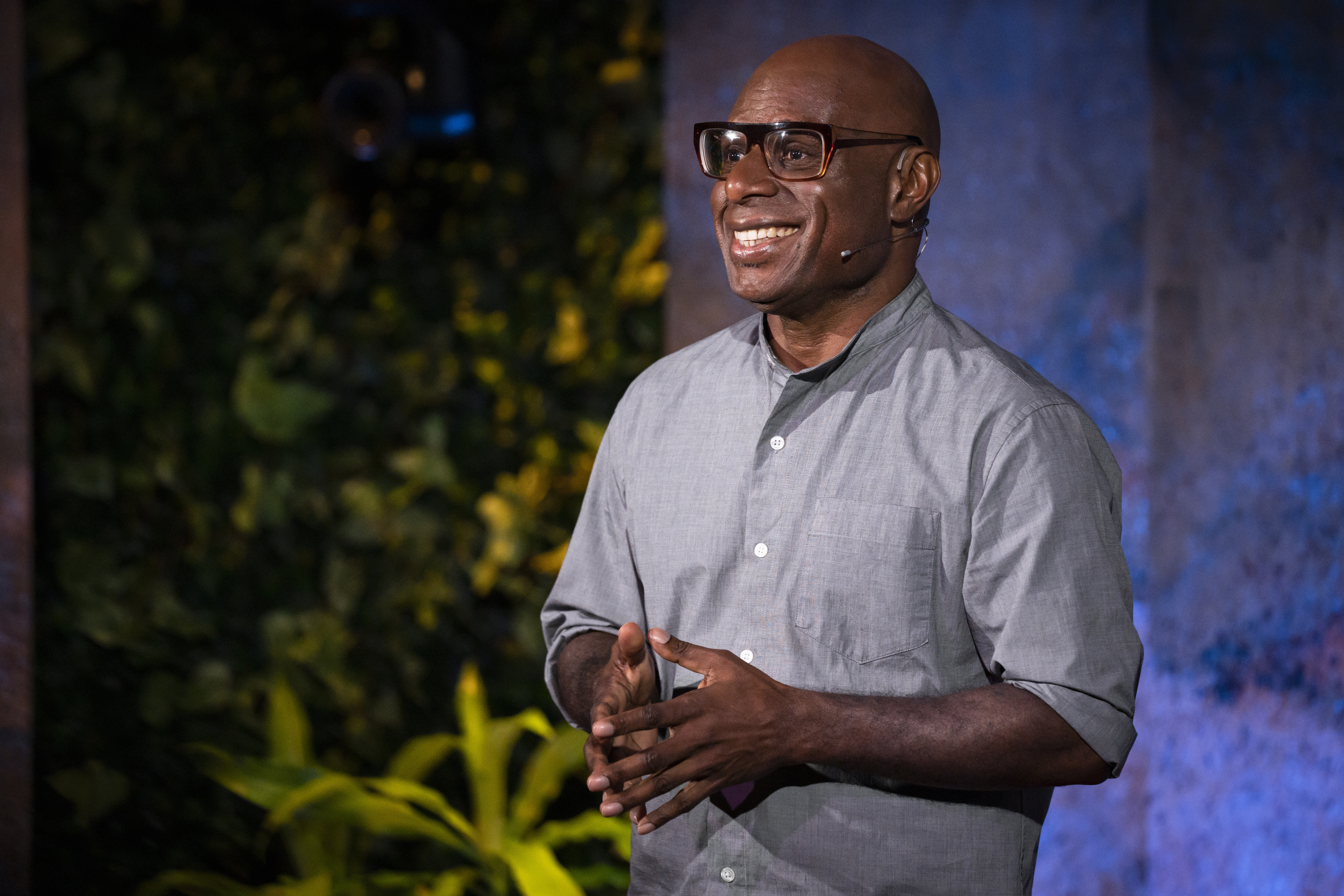 Big idea: Modern ideas aren’t always better ideas. We must understand how Indigenous wisdom can work in harmony with new science and technology if we want to save the planet.

Why? Consider the ingenuity of the thatch roof, a shelter made from locally harvested leaves and vines. In Papua New Guinea, people have relied on thatch roofs for centuries to weather strong tropical winds and keep their homes cool and breezy. Emmanuel “Manu” Peni instead decided to build his home there using modern techniques with steel beams and an iron roof. He ignored the merits of traditional building practices and suffered the consequences — the winds tipped his brand new house sideways and ripped off part of his roof. Now Peni wants to prevent the world from making the same mistake of underestimating the value of Indigenous knowledge, especially when it comes to solving the climate crisis. Indigenous people are experts at healing and protecting the planet, Peni says, because they have lived in harmony with their environments for thousands of years. He provides powerful examples of how traditional practices in his community already enact sustainable land management and closes with a plea to anyone listening: “Pay attention, learn, try to understand, respect and heed Indigenous guardianship,” he says. “Or else, like me, the next great wind will blow us all over.” 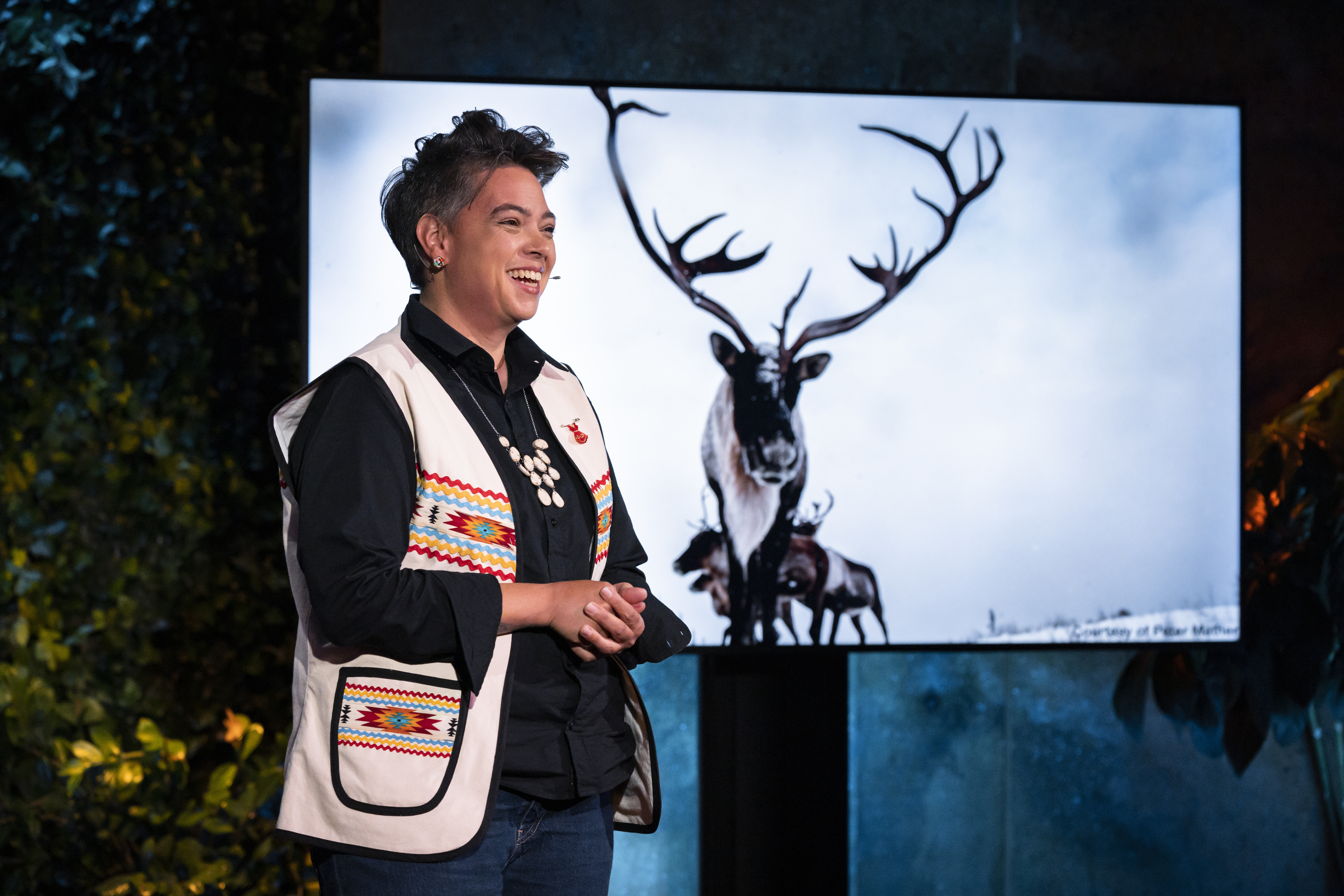 Big idea: If we all join Indigenous peoples in the fight to protect Earth’s biodiversity, we can heal our planet together.

Why? Valérie Courtois has witnessed firsthand the devastating impact of climate change in her homelands of Nitassinan, in what is now known as Canada. Two decades ago, she watched hundreds of thousands of caribou cross the Trans-Labrador highway. Today, that same caribou herd has dwindled to 8,000. But Courtois still has hope for Nitassinan and the world. Her inspiration: the Indigenous guardians who steward the region’s boreal forests, monitoring water quality, conducting climate research and working to restore species like caribou, salmon and moose. In return, she says, the forests are caring for their guardians too: helping people like Jarett Quock — a former heavy equipment operator who battled addiction and racism — heal from centuries of intergenerational trauma. Guardians already care for some of the largest protected areas on the planet, including a section of the Northwest Territories the size of Costa Rica. If we all join Indigenous peoples in the fight to protect Earth’s biodiversity — if we honor Indigenous knowledge and commit to sustained political action — we can heal our planet together. As Cortois puts it: “If we take care of the land, the land takes care of us.”